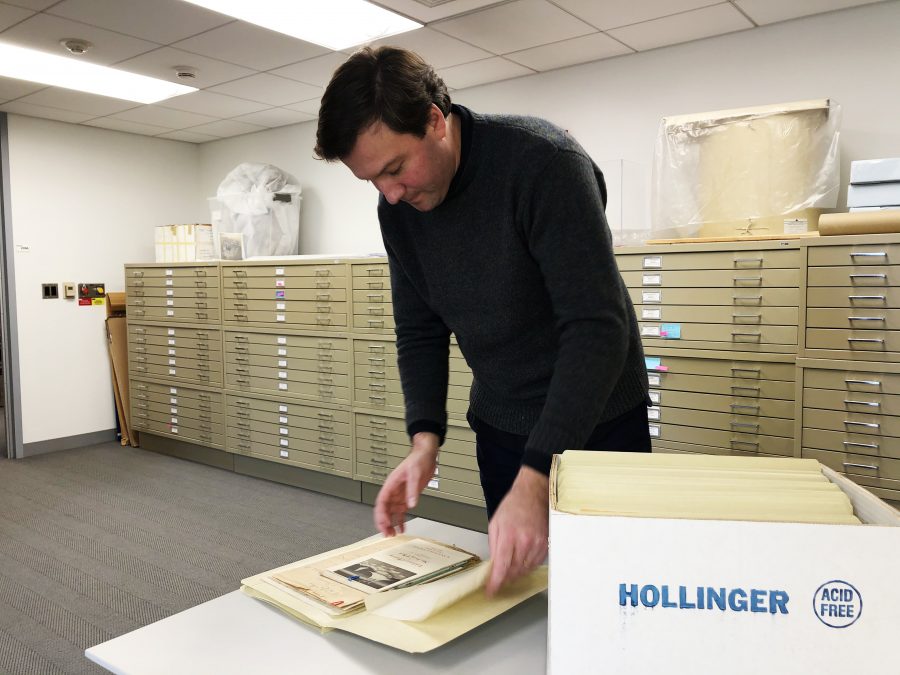 In a digital age when most students turn to the internet for research, Thomas Lannon, the college’s new Director of Special Collection and College Archives, is eager to bring more students into the vast collections of Skillman Library through coursework, collaboration, job opportunities, and just pure curiosity.

“Everything’s not online,” he said.

Prior to joining the college, Lannon served as the assistant director for manuscripts, archives and rare books at the New York Public Library where he worked closely with curators and acquisitions of new materials.

In his time there, Lannon helped to acquire the papers of journalist and author Tom Wolfe and worked closely with the New York Times corporate archives. These projects working with journalist archives were particularly interesting because journalists are a primary source to an event or history, according to Lannon.

At the New York Public Library, Lannon also worked closely with universities and students within New York City. These student interactions influenced Lannon’s desire to join a smaller, college community where he feels there is more consistent engagement within the surrounding community, a larger sense of college tradition, and more direct collaboration with students and courses.

“It just seems like there’s a lot of collaboration and making the archives be part of the curriculum [at Lafayette]…what we collect relates to what’s being taught,” Lannon said.

Since arriving in January, Lannon has already been a part of this collaboration through his close work with English professor Christopher Phillip’s Literature and Human Experience: Books and Readers course.

In addition to working closely with individual classes, Lannon has been working on understanding and exploring the special collections of the college, and especially how they are created. Understanding how a collection was developed, according to Lannon, allows one to make more sense of the history and values of a place.

“What gets saved and preserved is what becomes history so it’s important that people sort of advocate for preserving history so they can say that they were there,” Lannon said.

Lennon noted how The Queer Archives Project is an especially important example of this at Lafayette.

“The queer archives project is exciting at Lafayette because it documents voices of LGBT students but then that sort of proves they were here, and if we didn’t do that those histories would not exist,” he added.

While Lannon wants to keep exploring and understanding Lafayette’s archives and collections, he also said he is excited to work with different ways of exploring the college’s history and connection to the surrounding community and societal movements. One topic in particular that Lannon has had experience with at the New York Public Library and hopes to continue at the college is that of documenting the history of environmental activism.

“[I helped acquire the] papers that documented the origins and history of Earth Day because Earth Day was really only invented in 1970,” Lannon said.

On top of expanding the archives more into the Easton community and to the sustainability movement at Lafayette, Lannon said as he gets more familiar with what the college already has, he and others who work with the archives need to come up with a collection development plan to say what they are interested in collecting in the future. This will involve conversing and meeting stakeholders and considering what could be collected for exhibition purposes.

It also, for Lannon, will involve creating a plan to expand the archives in a way that also expands the representation within in.

“I think collections share a certain story of the past, and so what we collect in the future will hopefully tell new stories and be more inclusive and make libraries feel like a place where everyone is welcome and not just have it be about Shakespeare and football,” he said.