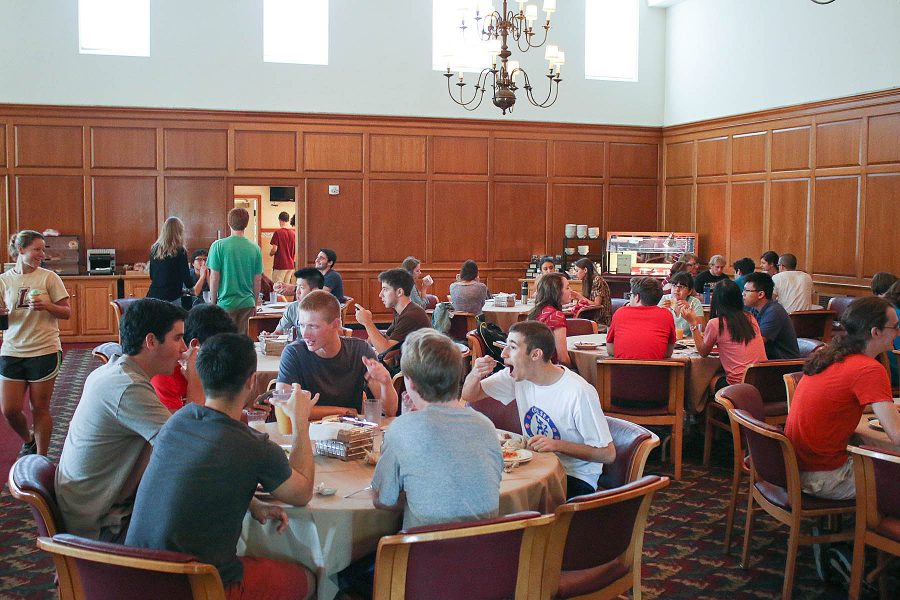 Students dine in Marquis Hall during a crowded lunch hour.

Students’ complaints about the changes to Dining Services ranged from the loss of the sandwich bar in Lower to the changes in meal plans and meal equivalency, but college officials say the reasoning behind these new changes will improve the connectedness of the college community.

“We were really…thinking about how we could get students to have a sense of community through dining,” Dean of Students Paul McLoughlin said.

Dining Services expanded meal equivalency in many of the dining halls on campus, such as Gilbert’s, where students can now find breakfast, lunch, and dinner items for a meal.

McLoughlin wanted more students to be able to eat together without having to worry which dining hall was most cost-efficient to them. Because of the increased amount of meal equivalency, he said, “a meal, is a meal, is a meal.”

“I think that we had a class issue,” McLoughlin said at a forum Dining Services held last Thursday by Bon Appetit and college officials. “We had some students that were eating in different places based on what was the most economical place for them to eat…I wanted students to be able to eat with people that they wanted to eat with.”

Several upper-classmen vetted their belief that they did not get fair warning of the change in the meal plans and how the perceive to have less value in flex-based meal plans. For example, a student has to pay more flex dollars to get a meal from Upper than from Lower, but both can be bought by one meal-swipe.

McLoughlin said in an interview that the meal plan options are not likely to change. McLoughlin sent out a campus-wide email in February 2014 announcing these changes to the meal plans.

Several students were also upset with options in Lower, such as the loss of the sandwich bar this year, replaced by a sushi bar, and the changes in meal equivalency.

“Sandwiches should be a staple food that you always have to get,” Robert Sacchetta ‘16 said after the forum. “So I don’t think that’s a good idea to remove that [from Lower], even for the sushi bar.”

“I don’t like Lower just because you can only get the meal selected options…” Emily Homan ‘15 said. “It’s not like I can get a bag of chips for a meal or something, I have to use my flex, which I don’t like.”

General Manager of Bon Appetit Joel Blice said the changes in Lower were made in order make the eatery more like a burger joint.

“The idea was kind of driven by Five Guys, because we heard last year…‘Five Guys,’” Blice said.

“I think [the burger menu in Lower] has improved, I like it,” Sam Hordeski ’15, who is on the student advisory committee for the Dining Services, said. “There’s more variety and you can still get customizable burgers… so I don’t think [Dining Services] have limited in any way in that sense.”

After the forum on Thursday, McLoughlin, Blice and other members of Dining Services met to discuss some of the issues brought up the next morning.

All sandwiches and salads in the coolers offered in Lower can be purchased with a meal-swipe. In the future, Lower will also have a case with more hot meal options for meal equivalency, according to Blice. Blice also said changes may be made to Upper in the future, such as a burrito bar, and some renovations to Marquis.

“I think it’ll be curious to revisit this topic in a little bit of time,” Student Government President Connor Heinlein ’15, who participated in some meetings to suggest changes to Dining Services, said. “I think there’s a lot of outcry at first with a lot of moving pieces.”