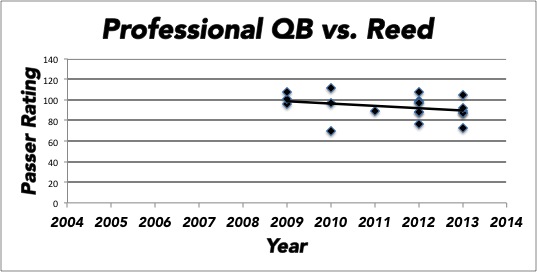 Like Tom Brady did in 2010 and 2013, freshman quarterback Drew Reed ‘17 will have overcome the challenge of finding a new favorite target in the 2014 season. With the departure of Mark Ross, Reed will have to find a new way to account for 1078 yards and eight touchdowns. Not to mention Reed will not have tight end Brandon Hall to receive, who totaled 489 yards and a touchdown last season.

Since 2009, there have been 10 separate occasions where a quarterback in the NFL has lost their number one receiver to either trade or injury to an entire season. What makes Reed’s situation even stranger is that he will have to call upon freshman that have yet to play a game at the collegiate level to fill the shoes of Ross and Hall.

What makes quarterbacks like Brady great is that they are able to adapt to such situations and still perform at a high level. If Reed is able to reproduce what he accomplished last year, there will be no doubt that he will be one of the elite quarterbacks in the FCS. Reed was able to throw for 1887 yards and 17 touchdowns in just eight games last season. Reed’s most eye-opening statistic might be his passing efficiency of 184.9, a stat that measures a quarterbacks overall performance in college football. The highest passing efficiency rating for a college career is credited to Sam Bradford of Oklahoma, who recorded a 175.6 rating over the span three years.

Unfortunately, a different metric is used in the NFL to measure a quarterback’s success, passer rating. Passer rating is a metric that takes into account passing attempts, completions, yards, touchdowns, and interceptions. Using this metric and its formula, Reed managed to attain a passer rating of 105.9 is his freshman season. Theoretically, Reed should have a lower passer rating and overall worse performance following the departure of Ross and Hall.

Above shows 10 NFL quarterbacks passer ratings over the course of a season graphed against their passer rating the season after when major injury or departure occurred at the wide receiver position.

It appears, that in Reed’s case, his passer rating and passing efficiency will suffer this year without Ross and Hall. In his first game of the season, Reed was 19-39 with a touchdown and three interceptions. This may have been because Reed has to throw to more inexperienced player or may be due to the fact that Reed is missing his favorite target. In these players’ absences, it seems that Reed, like Brady, will have to make the most of the cards dealt to him.