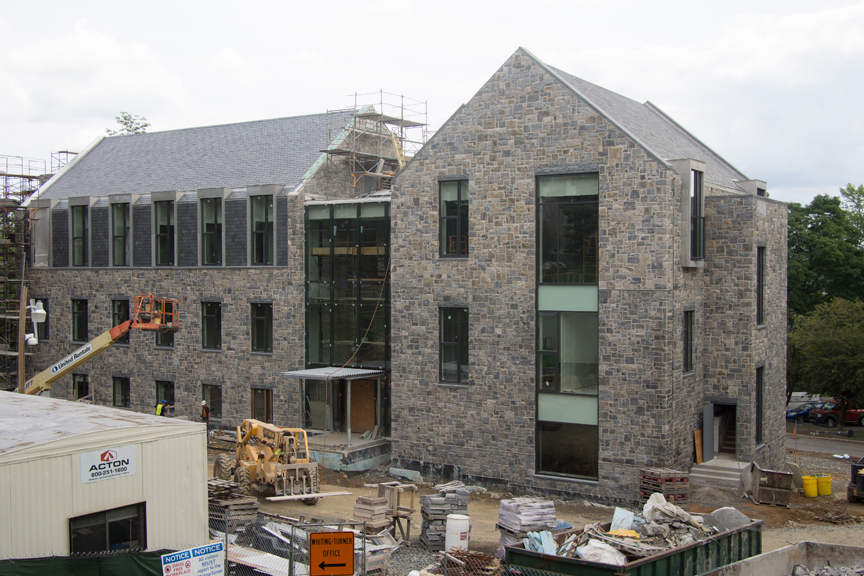 Oechsle Center for Global Education encountered difficulties while under construction over the winter.

The construction for a new academic building on campus faced difficulties due to severe winter weather and the amount of subsurface rock found at the construction site, according to Director of Facilities Planning and Construction Mary Wilford-Hunt.

Although the construction process has been confronted with a few challenges, classes are expected to be held in the Oechsle Center for Global Education in January 2015, according to Wilford-Hunt.

“Generally, construction went as planned, but, as with every major construction project there are always a few unforeseen challenges,” Mary Wilford-Hunt said.

The construction team “encountered more subsurface rock than we expected” despite extensive geotechnical investigations, according to Wilford-Hunt. Besides the additional rock found, she said, the harsh winter created some obstacles for construction. However, the construction was not significantly deterred “because the foundations were in place prior to the ground freezing, we were able to continue work throughout the winter months,” Wilford-Hunt said.

The issues concerning subsurface rock and the winter did not have a considerable effect on the budget overall. Plant Operations made sure to use “campus funds appropriately” and the project was “able to remain on or near budget,” Wilford-Hunt said.

The building will include “one 60 seat lecture hall, two 40 seat classrooms, one 12 seat seminar room and one 24 seat flexible classroom,” Wilford-Hunt said. The classrooms will all be equipped with the latest IT/AV standards.

Construction for the building began last fall. The International Affairs program, Anthropology and Sociology department and area studies programs are all expected to hold classes in the new building. Built with funding from Walter Oechsle ‘57, the $10 million project is part of a larger Lafayette initiative to focus on and develop the area of international studies.

International Affairs major Kanako Shibano ‘16 also believes that the Center is beneficial to the growing program.

“As an international student, it is nice to see more people interested in the topic of global affairs,” Shilbano said.

The construction of the new Center came after many events to celebrate the College’s focus on global education, including an address by Mikhail Gorbachev in 2011 and a dedication ceremony for Grossman House in 2013.