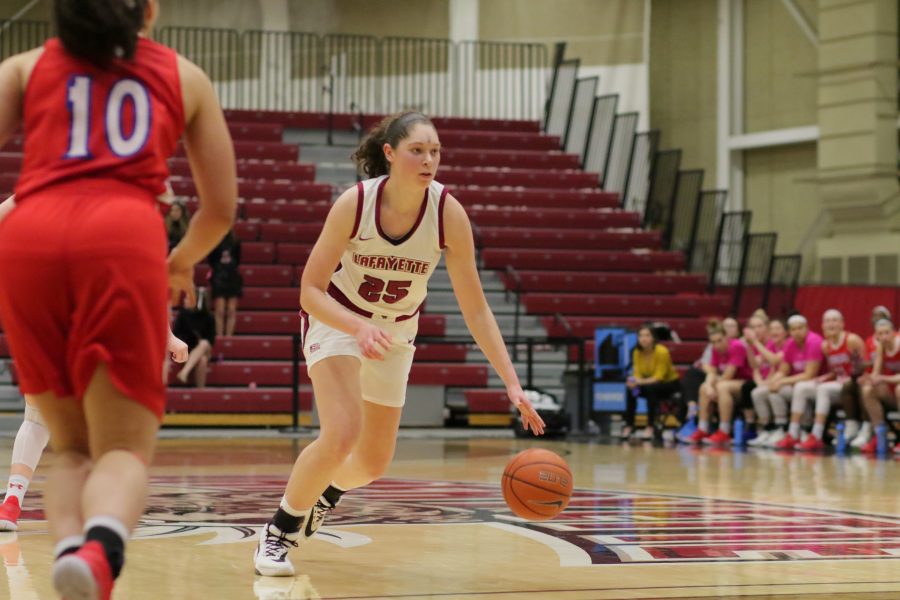 Junior forward Natalie Kucowski is the only player in school history to record 1000 points and 1000 rebounds. (Photo courtesy of Athletic Communications)

The women’s basketball team wrapped up their regular season with an overtime win over Navy last Saturday and a loss to league-leading Bucknell on Wednesday.

The Leopards finish with an 11-7 record in the conference, good for fifth place in the upcoming playoffs. The 11 Patriot League wins are the most the program has had since the 1991-92 season.

The victory over Navy was an overtime nail-biter with the Leopards coming out on top 62-59.

With 15 points and 12 rebounds, junior forward Natalie Kucowski became the first Lafayette women’s basketball player to ever record 1,000 rebounds and 1,000 points in her career.

“This is definitely a goal I set for myself and was able to achieve,” Kucowski said.

Two other Leopards scored in double figures against the Midshipmen. Senior forward Alexis Santarelli had 18 points and four steals, and junior guard Drew Freeland had a season-high 22 points, just one off her career-high.

“My teammates found me and put me in a position to score and the shots were falling this game,” Freeland said. “I think it just motivates me to continue to do what we do as a team and make the contribution I can.”

The Leopards came out hot, giving themselves a 21-7 lead after the first quarter and carrying a 10-point lead into halftime.

Navy completely flipped the switch in the second half, outscoring Lafayette 18-13 and 14-9 in the final two quarters to force overtime.

“We could have contained their shooters a little better, but they were hot because they were on their home court and it was their senior night,” Freeland said.

The Leopards had two chances to put the game away in regulation, but a three-pointer wouldn’t go and Kucowski made one of two free throws that could have made it a two-possession game. Navy hit a last-second triple to send the game to the extra frame.

“Over the past three years, we have been in a lot of close games that have come down to the last possession,” Kucowski said. “We have experience in these high pressure moments, so we are able to learn from the good and the bad and apply it to the next time we are in those situations.”

Sophomore guard Nicole Johnson scored five points in overtime and Lafayette held on for the victory.

“During [overtime], we did a really good job of executing to close out the game,” Kucowski said. “Our main focus was to communicate on defense, secure the rebound, and be strong with the ball.”

Against Bucknell, Kucowski was the only Leopard in double figures, recording 21 points and 12 rebounds for her 19th double-double of the season. She also blocked three shots.

The Leopards trailed by 12 at the half and never got closer than nine points as the Bison earned the season sweep of Lafayette.

The Patriot League tournament begins on Monday for the Leopards since they earned a first-round bye. They weren’t able to defeat their upcoming opponent Holy Cross in the regular season, but didn’t lose to them by double digits. On their last trip to Worcester, Mass., it took a three-point play by the Crusaders and a Freeland missed buzzer-beater attempt to seal a one-point win for Holy Cross.

The matchup pits Kucowski and Holy Cross’ senior forward Lauren Manis as the top two rebounders in the Patriot League against each other. Kucowski is fifth in the conference in scoring while Manis leads the league.

The quarterfinal game between Lafayette and Holy Cross will be on Monday at 7 p.m. at the Hart Center.