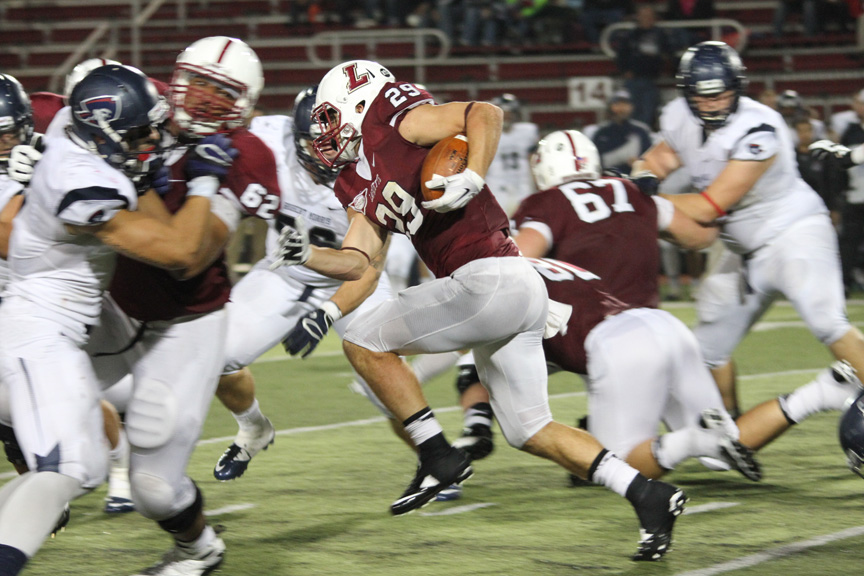 Senior Ross Scheuerman attacks the hole in game against Robert Morris. He led Lafayette in rushing with 173 yards in 22 carries on the day.

Sept. 13, 2014 was the day.  Raindrops were aplenty, sliding down the window of the press box, distorting the view of the Maroon and White as they took the field.  The slick surface created from the water hitting the turf didn’t cause any hesitation for the home squad to stick with their Head Coach’s smash mouth philosophy.

“You have to take what people are giving you. Spread offense makes the defense give you some room. These spread offenses are normally run-oriented,” Coach Frank Tavani said.

Headed by senior Ross Scheuerman, the Lafayette rushing game accounted for 324 of their overall 491 yards on offense. With 22 carries, Scheuerman legged out 173 yards, putting him into sixth place for career rushing at Lafayette with 2,549.

Freshman DeSean Brown averaged 20 yards on three carries in the game, while junior Deuce Gruden carried the ball 11 times in the second half.

Even with all of the success on the ground, Coach Tavani feels there is always room for improvement.

“We certainly need to continue to make progress. We made some improvement from game 1 to game 2. Not as much as I would have liked, especially on the offensive side of the ball,” Tavani said.

While the offense still has things left to be proven, the defense has looked comfortable thus far in the new system under Defensive Coordinator Art Link.

“The new system we brought in I am liking a lot. It is pretty simple. We line up, we play fast, we play hard,” junior Darren Wright said.

The new look defense stopped Robert Morris to 108 offensive yards, and did not allow a successful third down conversion in 16 attempts. Lafayette also took back two of their three interceptions for six, and held The Sports Network National Freshman of the Week Rameses Owens to a total of 17 yards.

This stalwart defense has a drastic change in competition this week when they face William and Mary, who beat the Leopards 34-6 last season. “We have to get into a better rhythm offensively. We know the level of competition is about to take a drastic change,” Tavani said. “This is as big, and strong and fast a football team as we will face all year, but we are excited for the challenge.” With William and Mary’s opponents averaging almost 160 yards per game, Lafayette might want to stick to what they did oh so well last week, as well as in past years.