State of the race: On the week of Super Tuesday, college experts discuss the presidential primaries 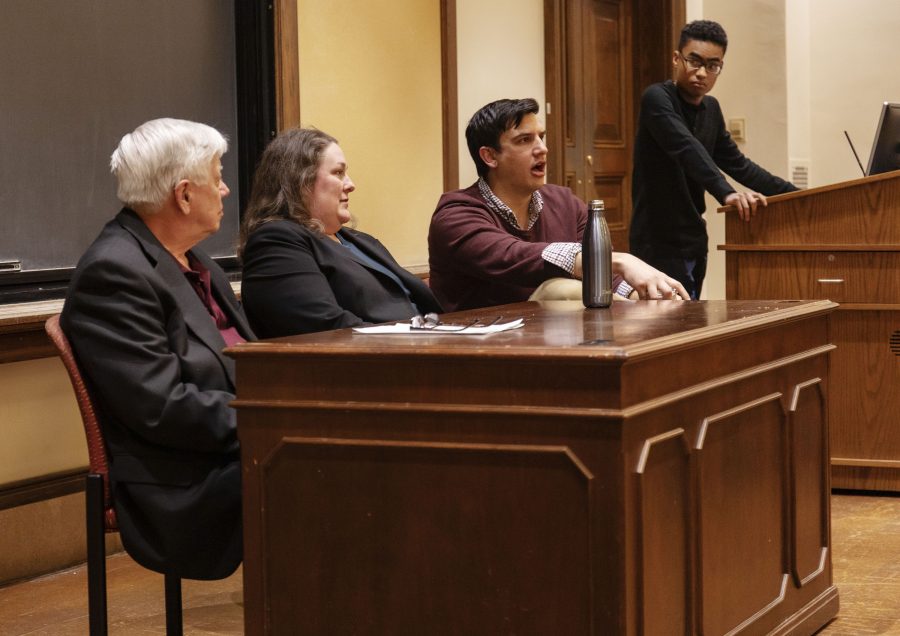 This past week saw the departures of several candidates form the Democratic president race and the emergence of candidates Joe Biden and Bernie Sanders as solidified frontrunners for the democratic nomination. In anticipation of the results of Super Tuesday and the rest of the election thereafter, the College Democrats organized a “State of the Race” panel this past Monday to discuss what has been going on, and what students may see in the coming months.

The panel was led by professors Mallory SoRelle, Andrew Clarke, and John Kincaid from the Government and Law Department. The professors discussed Super Tuesday, the Democratic Primary, and various other notable points of the race thus far.

“In some ways, it seems like everything is up in the air…there are a lot of things happening,”  Clarke said.

“The state of the race is that we know a lot and nothing at all…we have no idea what could happen by the end of the primary…there is a lot left to be decided,” SoRelle added.

After a few opening remarks, the panelists ventured into specific areas of discussion, including the topic of electability, which has played an important role for many Democrats in choosing their candidate to face President Donald Trump in the general election. SoRelle said she felt this issue was not as critical as it is often made out to be.

“I think the larger danger is not electability, but who is actually going to run a good campaign,” she added. “Instead of an election based on electability, this will be an election that is more driven by who people are voting against at the federal level, and it’s going to depend a lot on what the parties focus their messaging around.”

Much of the discussion around electability in this particular race is centered around whether Bernie Sanders is an electable candidate. Kincaid reminded the audience that “most experts said that Trump could not be elected. So, maybe Bernie can be elected.”

“If the economy is not on a rebound by November, and Trump is seen as not a credible person to handle coronavirus…that could make Bernie Sanders very electable,” he said.

The panelists also discussed the divisions present in both the Republican and Democratic parties. Clarke said that despite these disagreements, the Democratic party will become more cohesive as time goes on.

“There are deep divisions among the Republican Party, but since Trump became President Trump, all those divisions kind of got swept under the rug,” he said. “While there may be parallels [of these divisions] on the Democratic side now, I think whoever wins [the nomination] will have a unified democratic party.”

SoRelle agreed, and also pointed out that those current divisions are not as clear-cut as people may think.

“Most voters in the democratic primary do not have preferences that are consistent with a moderate or progressive set of candidates,” she explained. “Second choice votes among [Pete Buttigieg] supporters are split pretty evenly between Sanders, [Joseph R. Biden], and [Elizabeth Warren].  So, the idea that Buttigieg dropping out [meant that] all those votes were going to go to Biden is a pretty big assumption at this point.”

Despite this overlap, SoRelle said she believes that Biden and Warren will be helped by Buttigieg and Amy Klobuchar leaving the race and endorsing Biden, while Sanders will be weakened the most by their departure.

The panelists also mentioned Michael Bloomberg, whose multi-million dollar media blitz did not prevent him from dropping out of the race on Wednesday. Kincaid called Bloomberg’s performance in the primaries “pathetic” in a follow-up email to the Lafayette.

“Billionaires don’t always understand that message and persona are more important than money,” he wrote. “Money couldn’t compensate for his flat message and deadpan persona.”

Sanders and Biden emerged as the undisputed Democratic front-runners following a remarkable comeback by the Biden campaign on Tuesday, with Sanders failing to garner the votes from his younger base he was hoping to gain.

“Super Tuesday saw socialism succumb to senility because most Democrats desperately want a candidate they believe can beat Trump. Biden’s their man,” Kincaid wrote. “By suspending their campaigns and endorsing Biden, Buttigieg and Klobuchar helped him greatly and positioned themselves for positions in a Biden administration. A Biden-Klobuchar ticket might do very well among the suburban voters Democrats need to capture from Trump.”

Kincaid added that “young people did not turn out in large numbers compared to older voters,” and cited this as a reason that Sanders’ did not do as well as expected on Super Tuesday.

He also noted that primary turnouts overall in both the Republican and Democratic parties were unusually high, and “suggest that both Democratic and Republican turnouts will surge in November.”