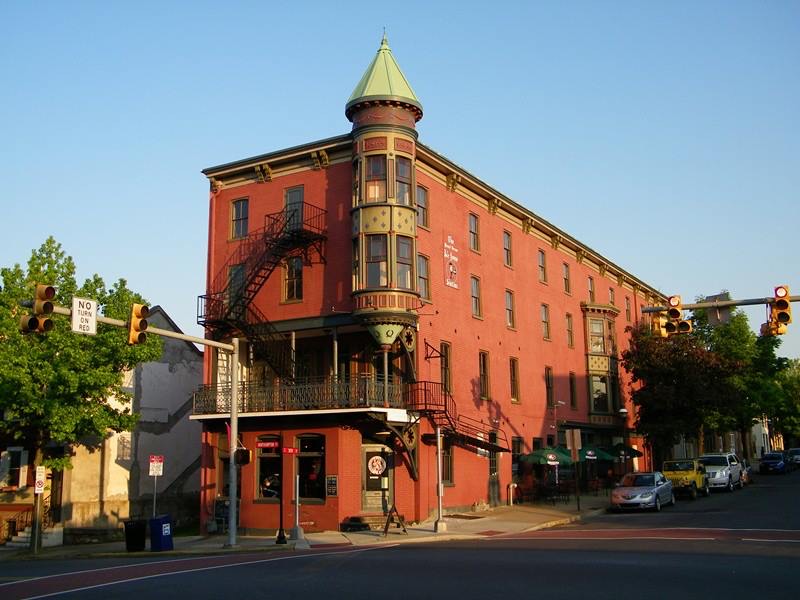 When people ask each other what the best restaurants are, they commonly list a roll call of high-end French, Italian and American restaurants.  In some places, this is true. However, I implore people to give their recommendation more thought. I love fine dining, and I am always on the hunt for another good fancy restaurant, but I have come to realize that you don’t need shiny white porcelain plates and expensive red wine to be one of the best restaurants.  You just need damn good food. Two Rivers Brewery may not be your idea of the best restaurant in Easton, but it is easily near the top of my list.

Two Rivers Brewery sits perched atop its hill on Northampton Street overlooking downtown Easton with an old grandeur. The restaurant has a rustic and relaxed ambiance befitting for an excellent gastropub. I distinctly remember walking into Two Rivers and noticing a subtle musty smell of beer. It evoked the feeling of an honest bar. But the black cloth napkins and water glasses tell a different story indicative of the quality of the meal you are about to have.

As you can imagine for a brewery, the beer list is extensive, but full disclosure, I am not a connoisseur of craft beer (wine is my thing), so I will not attempt to comment on something I know almost nothing about.

The food here has its roots in classic pub cuisine, but as in any gastropub, there is an increased level of refinement. The menu matches the laid-back atmosphere while satisfying the most discerning foodie.  There is fish and steak on the menu, but I would recommend leaving those to have at another restaurant and instead get your hands (and face) dirty with one of the kitchen’s delicious sandwiches. While you may recognize each sandwich, the chef adds an indulgent twist that, in the words of celebrity chef Emeril Lagasse, “kicks it up a notch.”

The peanut butter burger may sound rather off-putting, but do not be fooled by this odd combination.  The peanut butter is an expected surprise, but the juicy burger gives the profile some backbone, and the pickled red onions contribute a welcomed sharp, pungent flavor that rounds out a rather well-balanced dish.  It kind of feels like you are eating a peanut butter sandwich, but you still get the heft of a hearty burger.

The pulled pork is also a wonderful choice. The beer braised pork pairs well with the tangy coleslaw, and the fried pickle on top of the brioche bun is the kind of casual hedonism we can all appreciate.

The sweet endings are a delightful way to finish off the meal.  I recommend the apple cider donuts which come out hot and fresh with a delicious caramel sauce.

Being a bar, there are also plenty of activities throughout the week.  Most notable is Two Rivers’ trivia night on Mondays, which brings in committed competitors from all over Easton.

In the end, Two Rivers has cemented its place on my short-list for best restaurants in Easton.  The place is relaxed and comfortable, and the food is just flat out delicious. I am sure many people will disagree with me so let’s discuss it over a burger and beer at Two Rivers.