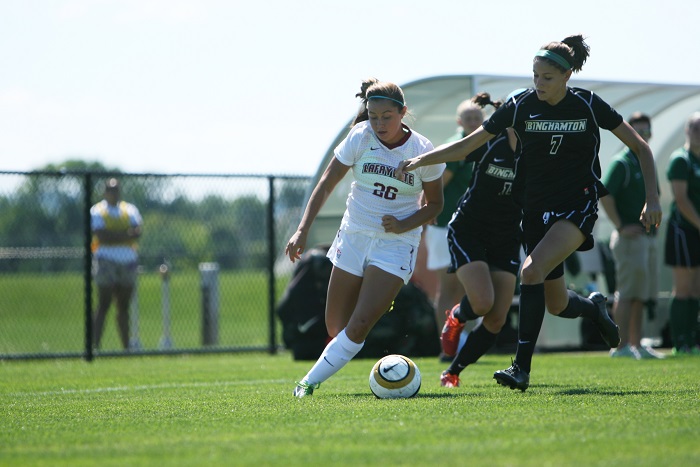 Kaelin King shows off her footwork by going past the defender

What are the main challenges that come with playing forward?

There’s constant pressure with a defender on you so you never have open space. Also your back is facing the goal so it’s tough to keep track of your position and where you need to go.

How do you think your game has changed from freshmen to sophomore year?

I was trying to find my fit with the team freshmen year and incorporate myself wherever I was needed. Now that I am more comfortable with the system, I can establish my position and cohesively use my skill set within the team.

What are the team’s goals going into the closing stretch of the season?

Work on making the Patriot League tournament and playing to our full potential every game.

Who has been the most influential figure throughout your soccer career?

My high school coach. He was the first person that saw my potential as a player and gave me confidence to be an active leader and presence on the field. He also pointed out that I was capable of playing at the collegiate level.

Being from California, how have you gotten adjusted to the East Coast weather?

What was recruiting like, and how did you decide on Lafayette?

Recruiting was one of the most difficult processes I’ve ever gone through. It was overwhelming to be 15 and 16 years old, going through interviews and marketing myself to coaches. I knew from the start I did want to stay on the West Coast so that narrowed my decision down to the East Coast early on. I knew that I wanted good academics in addition to soccer so I began to look at the Ivy League, Patriot League, and some D3 schools. Then I met with Coach Statham and everything clicked; he saw me play in a tournament and offered me a spot right after. I was in a conflict between D1 and D3 schools because I didn’t know what level of commitment I wanted, but once I visited Lafayette I knew it was right for me and just went with my gut.

Who on the team deserves a shout-out for their performance thus far?

Sophomore Dani Sedillo because she’s a stud of a goalkeeper and senior Jaclyn Giordano because she’s our captain and an amazing presence both on and off of the field.

What’s your favorite song to listen to before a game?

If you could meet one celebrity, who would it be?

What don’t people know about you?

I want to keep playing for as long as I can just because I love the sport…I can’t imagine playing at a competitive level forever.